Newly Ordained Fr. Ambiorix Osorio to Celebrate Mass and Novena with Us 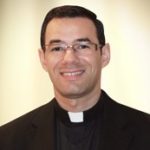 Father Osorio will celebrate 11:30 a.m. Sunday Mass with us at Our Lady Queen of Martyrs on July 31 and lead us in day 5 of the St. John Vianney Novena.

Each year leading up to the Feast Day of St. John Vianney (August 4), we pray for the intercession of the patron of priests to bless our diocese with good parish priests.  Father Osorio was newly ordained with nine others on June 4, 2016. A native of the Dominican Republic, he moved to New York in 1998 and began his university studies at Technology Learning Institute in Harrison, NY.   During his formation, he served summer assignments at St. Mary Mother of Jesus parish in Bensonhurst and at Incarnation Church in Queens Village. He is now Parochial Vicar at St. Andrew Avellino in Flushing, where he previously served as deacon.

St. John Vianney was an inspiration to him while he was discerning the priestly call and worried, as did the saint, over studying another language, Latin. “St. John Vianney experienced challenges but God was with him,” Father Osorio says.