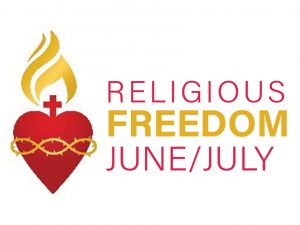 Actions and Reflections for July 26: On Religious Freedom

Pray for a new birth of freedom in our country.

REFLECT: Religious liberty is not only about our ability to go to Mass on Sunday or pray the Rosary at home. It is about whether we can make our contribution to the common good of all Americans.… What is at stake is whether America will continue to have a free, creative, and robust civil society—or whether the state alone will determine who gets to contribute to the common good, and how they get to do it.… Restrictions on religious liberty are an attack on civil society and the American genius for voluntary associations.… [Religious liberty] is our American heritage, our most cherished freedom. It is the first freedom because if we are not free in our conscience and our practice of religion, all other freedoms are fragile. If citizens are not free in their own consciences, how can they be free in relation to others, or to the state? If our obligations and duties to God are impeded, or even worse, contradicted by the government, then we can no longer claim to be a land of the free, and a beacon of hope for the world.… The teaching of the Church is absolutely clear about religious liberty: The human person has a right to religious freedom. This freedom means that all men are to be immune from coercion on the part of individuals or of social groups and of any human power, in such wise that in matters religious no one is to be forced to act in a manner contrary to his own beliefs. (Excerpted from United States Conference of Catholic Bishops, “Our First, Most Cherished Liberty”)

Actions and Reflections for July 19: On Freedom to Serve in Healthcare and Social Services

Pray that governments would respect the consciences of the Little Sisters of the Poor and all Christians who care for the sick and vulnerable.

REFLECT: For centuries, the Church has carried on the healing ministry of Christ by building institutions dedicated to medicine and accompaniment of the dying. Indeed, the Church invented the hospital as we know it. Today, orders like the Little Sisters of the Poor serve elderly low-income Americans of all backgrounds. But the Little Sisters’ work was put at risk because of lawsuits brought by the states of California and Pennsylvania against the expanded religious and moral exemption to the Health and Human Services (HHS) mandate. (On July 8, 2020 the Little Sisters won their case at the U.S. Supreme Court.) Elsewhere, Catholic hospitals are constantly defending themselves against lawsuits and government orders that try to force them to participate in harmful procedures, such as sterilization, gender reassignment surgery, and even abortion. It is unthinkable that we would undermine our mission to heal by destroying innocent life and harming the persons for whom we are called to care.

LEARN: View the video Catholics Called to Stand Up for Conscience Rights.

Actions and Reflections for July 12: On Christians in the Middle East

Pope Francis has said, “Great concern arises from the condition of life faced by Christians who in many parts of the Middle East suffer gravely as a consequence of the current tensions and conflicts underway.…We must not resign ourselves to thinking of a Middle East without Christians, who for 2,000 years have confessed the name of Jesus, and have been fully integrated as citizens into the social, cultural and religious life of the nations to which they belong.”

REFLECT: Our Christian brothers and sisters in the Middle East need our solidarity, and the Middle East needs our Christian brothers and sisters. A concern for our Christian brethren is inclusive and does not exclude a concern for all the peoples of the region who suffer violence and persecution, both minorities and majorities, both Muslims and Christians. A recent visit by an USCCB delegation to Iraq confirmed once again that what has happened—and continues to happen—to Christians, Yezidis, Shia Muslims, and other minorities in Syria and Iraq, at the hands of the so-called Islamic State, is genocide. It is important for Syrians and Iraqis of all faiths to recognize this as genocide, for that recognition is a way to help everyone come to grips with what is happening and to form future generations that will reject any ideology that leads to genocidal acts and other atrocities.

ACT: Solidarity with people of faith in other countries begins with learning about their struggles. The USCCB publishes a religious liberty newsletter that will keep you informed on many subjects. Sign up to receive First Freedom News.  Or listen to First Freedom podcast.

Actions and Reflections for July 5: On Religious Minorities in China

Pray for the freedom of the Church in China, and that the rights of all religious minorities would be respected.

REFLECT: Under the Chinese Communist Party, Chinese citizens have limited religious freedom. Since 2013, religious persecution has intensified under a campaign for the “sinicization” of religion—an effort to have religions conform to government-sanctioned interpretations of Chinese culture. Muslims have suffered grievous human rights abuses. Since 2017, 800,000 to possibly 2 million ethnic Uighur, Kazakh, Kyrgyz, and Hui Muslims have been arbitrarily detained in mass internment camps. Other religions are impacted by the government’s sinicization campaign, including the estimated 12 million Catholics in China.

While the Vatican has reached a provisional agreement with China on the issue of episcopal appointments, reports of persecution by the Chinese government persist as underground churches are closed and priests detained, crosses destroyed, bibles confiscated, and children younger than age 18 are forbidden from attending Mass and receiving religious instruction. Ultimately time will tell if the faithful will be allowed to practice their religion independent of state control.

ACT: Solidarity with people of faith in other countries begins with learning about their struggles. The USCCB publishes a religious liberty newsletter that will keep you informed. Sign up to receive First Freedom News.

Actions and Reflections for June 28: On Adoption and Foster Care

Pray that children waiting to be placed in a loving home and the caregivers who selflessly serve those children will find strength and support from the Church.

REFLECT: For centuries the Church has put this work of charity and caring for “the orphan”into practice by building adoption and foster care institutions. Today, the opioid crisis has put a strain on the foster care system. Yet while more children are waiting to be placed in families, faith-based child welfare providers are being targeted for closures because of their religious convictions. In Illinois, Massachusetts, California, and D.C., service providers who have a track record of excellence in recruiting and assisting foster families have already been shut down. In Michigan, sexual orientation/gender identity (SOGI) activists have gone out of their way to challenge Catholic Charities, and Philadelphia Catholic Social Services is taking the struggle to continue to foster children to the Supreme Court. Intolerance for religious views has real consequences, and in this case, it is vulnerable children who have suffered. Let’s pray and act to keep kids first.

ACT: Contact your U.S. senators and representatives today and ask them to cosponsor and support the federal Child Welfare Provider Inclusion Act. If passed, it would prohibit the federal government and any state that receives certain federal funding from discriminating against child welfare service providers on the basis that they decline to provide a child welfare service that conflicts with their sincerely held religious beliefs or moral convictions. (To track bills and find your representatives and senators, go to www.govtrack.us/).

LEARN:Read the USCCB view on the Defense of Marriage.

Actions and Reflections for June 21: The USCCB on Catholic Schools

Pray that Catholic schools in our country would be free to teach the truth about God and his creation.

REFLECT: Education is central to the Church’s mission. In fact, one of the Spiritual Works of Mercy is to teach. In the United States, the Catholic school system grew out of necessity when the wave of 19th-century Catholic immigrants felt unwelcome in the public school system. Since then, Catholic schools have been significant anchor institutions in many neighborhoods, benefiting even those who are not their students. Catholic leaders have played a leading role in ensuring that all children have access to quality education. Education is what Catholics do, and an America without Catholic schools is unimaginable. Catholic schools need the space to operate in accordance with Catholic convictions if they are to continue to be a source of vitality for our society.

LEARN: Read about Discrimination Against Christian Students on Campus.

Actions and Reflections for June 14: On Respect for Houses of Worship

Pray that people of all faiths — Christian, Jewish, Muslim — would be free to worship without fear of attacks and harassment.

Support increased funding for the FEMA Nonprofit Security Grant Program. This program provides grants to nonprofits, including houses of worship, to improve security. While we should hope, pray, and work for a country where people can worship without fear, we can also take practical steps to protect churches, mosques, and synagogues. Contact your Representative and Senators today.

Read the Declaration on Human Dignity, which is available on the Vatican website, and the USCCB’s summary of this Second Vatican Council Declaration on Religious Liberty. Watch here the videos, produced by the USCCB, on the meaning of religious freedom.

Catholics Called to Stand Up for Conscience Rights

What Is Religious Freedom?