A Message from Bishop Sanchez

Bishops return to the Holy See every five years for an “ad limina” visit to the pope and various officials. The U.S. Bishops begin their visit this November. Here are some words and pictures from our pastor, Bishop Paul R. Sanchez, from his weeklong trip to Rome.

I have the privilege today of joining the Roman Catholic Bishops of New York State in their traditional “ad limina apostolorum” (to the threshold of the Apostles) visit to Rome. The visit has two purposes: (1) to venerate the tombs of the Holy Apostles, Peter and Paul, and (2) to meet with the Successor of Peter, the Bishop of Rome, Pope Francis. 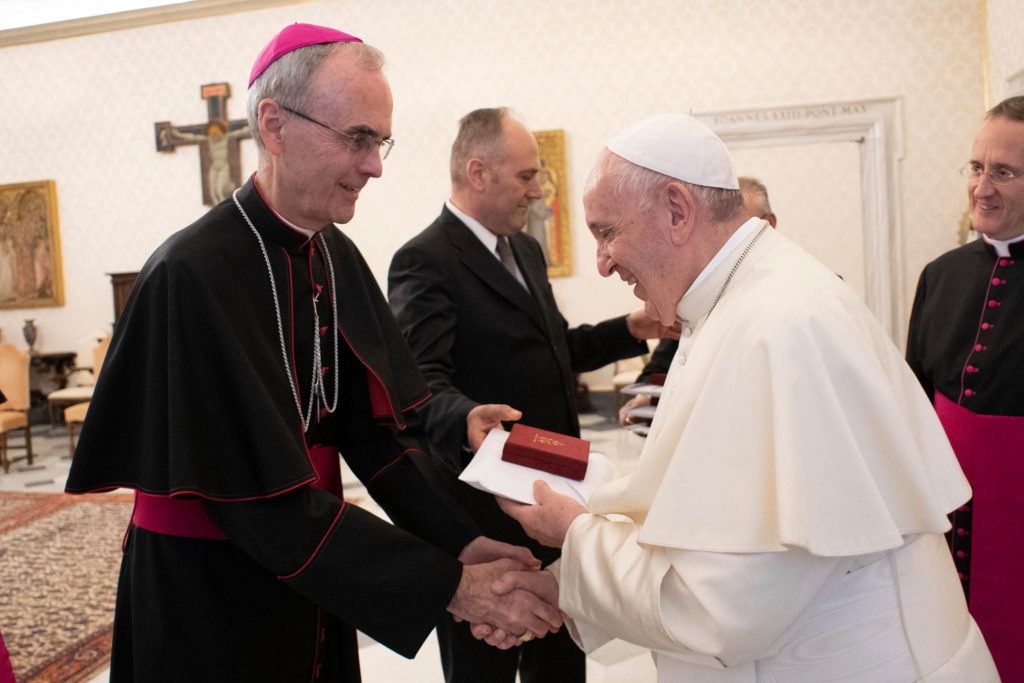 In addition to the opportunity to strengthen our communion with Pope Francis and to discuss questions about our ecclesial mission, the visit will include the celebration of the Eucharist in the major Roman Basilicas.

Be assured that I will pray for your intentions during these special days. I hope to share with you further reports on the visit, which will include meetings with the various Congregations and Dicasteries in Rome. These offices exist to support the work of the Church throughout the world. Please keep the Bishops in your prayers as well during these days that we may be open to God’s Grace in a renewed way. May God continue to watch over you!

I arrived safely in Rome on Friday morning (11/8) with several of the Bishops of our Diocese. We arranged to meet Father John Cush, a Brooklyn priest, who is Academic Dean at the North American College, the major seminary here in Rome. We concelebrated Mass in the chapel at the College. The Mass was a special grace for me because it evoked memories of my time as a seminarian at the same college from 1968 to 1972.

Providentially, we arrive in Rome on the day before the Feast of the Dedication of the Basilica of St. John Lateran (11/9). We, the New York State Bishops, will be concelebrating Mass in the Basilica of St. John Lateran next Friday (11/15). It was next to this Basilica where many of the earlier Popes lived and worked. The Basilica is thus another reminder of our unity with the Successor to the Chair of Peter, who, as Saint Ignatius of Antioch wrote, “presides over the whole assembly of Charity.”

May God continue to enable us to grow in unity and Charity! Blessings from the Eternal City!

On the Saturday (11/9) before the meetings between the New York State Bishops and the various Vatican congregations, I had the opportunity to revisit the excavations under St. Peter’s Basilica. In the accompanying picture, I stand in front of the altar that sits over the tomb of St. Peter with Bishops Chappetto and Massa and a couple who joined us on the tour.

The tour identified by the Italian word “Scavi” (meaning “excavations”) is a fascinating history of how the bones of St. Peter were discovered in the last century under the great Basilica  of St. Peter’s which sits on the Vatican Hill. The Christian belief was always that Peter was crucified and buried on that spot. But archaeological work begun in 1939 and concluding years later found and tested bones that are those of St. Peter. For further information, I recommend you read The Tomb of St. Peter, written by the Italian archaeologist who completed the excavations.

In a week during which the Bishops will pray at the tombs of St. Peter and St. Paul, the tour was a providential opportunity to reflect on the foundation of our Catholic Church on Christ and His Apostles.

Today, Monday, day four in Rome, began with the celebration of Mass at the Basilica Church of St. Mary Major. The Mass was followed by visits to two different Vatican offices: the Council for Christian Unity and the Congregation for the Causes of Saints. In the afternoon, the bishops visited the Office for Laity, Family and Life. All three visits gave us the opportunity to be better informed about the work of each office and to share ideas and concerns from our American perspective. Tomorrow I will bring your prayers and intentions to the Mass which we will celebrate at another major Romano Basilica, the Church of St. John Lateran. May the Lord continue to bless you in this month of All Souls!

During our week, we had meetings with almost all the Vatican offices. Among them were meetings with members of the Congregations for the Doctrine of the Faith, for the Clergy, for Bishops, for Divine Worship, and for the Protection of Minors. We also met with the Cardinal Secretary of State Cardinal Pietro Parolin. Each meeting was an opportunity to share ideas and concerns from our American perspective and learn from their worldwide view.

On November 15, I gathered with the other NY State Bishops in the Papal library to have an audience with Pope Francis. The Holy Father greeted each one of us and dialogued with us for over one hour. He was engaging, informative and humble. His stamina never ceases to amaze me. Following our audience, Pope Francis was to meet with a Grand Imam and then with a group of lawyers. Latter that same day, he went to visit the poor in the piazza outside St. Peter’s. Among the topics which we discussed with Pope Francis were: immigration, Catholic education and care for the victims of abuse. Pope Francis stressed the need for us to be close to the Lord in prayer and close to one another in mutual support.

Our ad limina visit concluded with a concelebrated Mass in the Basilica of St. John Lateran on Friday November 15.

Be assured I offered your prayers and intentions at all the Masses and celebrations of the Eucharist during those special days in Rome. I continue to be grateful for your prayers for me and for my fellow priests and for all who minister here at OLQM. God bless you all! 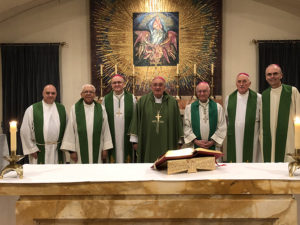 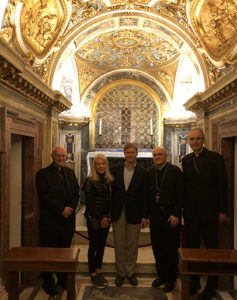 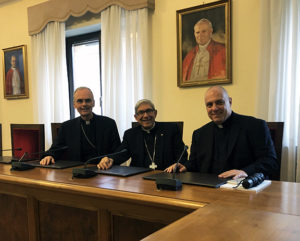 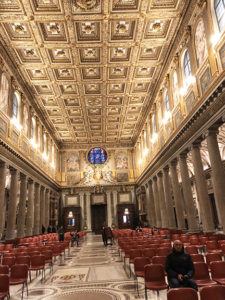 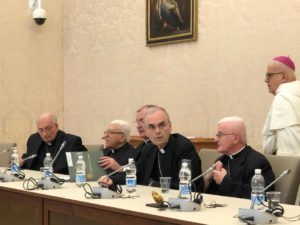 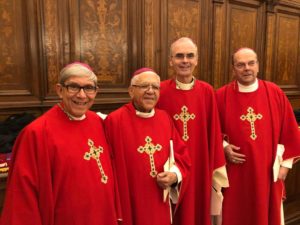 Captions
(1) Left to right: Msgr. Steven Aguggia, Bishop Guy Sansaricq, Bishop James Massa, Bishop Nicholas DiMarzio, Bishop Ray Chappetto, Bishop Neil Tiederman and myself after Mass at the North American College.
(2) Bishops Chappetto, Massa, and Sanchez in front of the altar that sits over the tomb of St. Peter, joined here with a married couple from New York.
(3) Bishops Sanchez and Cisneros with Msgr. Aguggia await the beginning of the bishops meeting with the Congregation for the Causes of Saint.
(4) The magnificent ceiling at the Basilica Church of St. Mary Major.
(5) Bishops DiMarzio, Sansaricq, Barres, Sanchez, and Grosz (from Buffalo) await the start of a meeting with the Congregation for Catholic Education.
(6)Bishops Cisneros, Sansaricq, Sanchez, and Cunningham (from Syracuse) prepare to concelebrate Mass at the Basilica of St. Mary Major in Rome.