The Saints of August 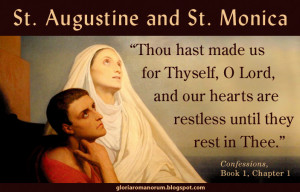 During these slow days of August, when a lot of us are on vacation and distracted by sand or surf, it might be worthwhile to take a glance at the church calendar.

Squeezed into what we otherwise consider to be Ordinary Time, you find a surprising number of important saints.

On August 4th, we have the memorial of St. John Mary Vianney, and conclude the novena in his honor.

Later in the month, we honor St. Augustine’ (August 28) and his mother, St. Monica,(August 27)—whose prayers helped to transform her pagan and promiscuous son into one of the greatest teachers and doctors of the Church. Behind every great man there is a woman; very often, it seems, it’s a mother.

Scattered throughout the month, we stumble upon giants: St. Bernard (August 20th); St. Louis of France (the 25th); St. Clare (the 11th). If you are looking for a month of All Star Saints, August is it.

This month, we even remember a recent addition to the roster, emblematic of our own troubled time. On
August 9th, the Church honors St. Teresa Benedicta of the Cross—better known, perhaps, as Edith Stein, a Jewish convert who became a Carmelite nun, and who died in the Holocaust.

There are countless other saints and martyrs we can remember this month: men and women and children whose names may be unknown to us.

There are those who have suffered for the faith (and continue to suffer) in China, or the Middle East. There are evangelists and missionaries who died trying to preach God’s word in deserts and jungles, in cities and in swamps. The fact is, there are too many saints and martyrs for us to count—certainly too many to fit on any one calendar, in any one year.

But if you have a moment this month, find some time to remember. Whisper a prayer. Offer a thank you. And think, especially, about those martyrs.

If you find yourself on a warm beach under a blue sky, look up for a moment. Watch the waves, study the tide, as the ocean rises and ebbs. Wonder, if you can, about all those who have arrived on distant shores, bearing a bible and a rosary, promising salvation but meeting, instead, their own destruction.

Certainly, they’ll appreciate the thought. And so, no doubt, will the Queen of Martyrs.