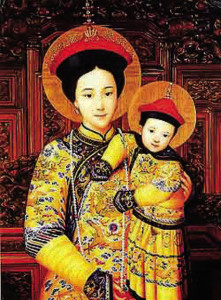 An image of Our Lady of China blessed by Pope Pius XI in 1928.

Anyone who saw the 2002 Super Bowl saw something unforgettable. And it had nothing to do with sports.

It was in the New Orleans Super Dome. The half-time entertainment was Bono and U-2. There were 100,000 people in the stadium, cheering wildly. Bono stepped onto the stage and the lights dimmed and the crowd roared and the band began to play. Behind the stage a massive banner started to rise, from the floor of the stage toward the ceiling, hundreds of feet above. It was stunning. Because on the banner were the names of all those who had died on 9/11, just four months before.

And the music continued, and it went on for several minutes. And the banner kept growing, and the list kept getting longer. It seemed like it would never end. The loss was so enormous. To see it so clearly was devastating.

And it was that way for me, too, with the Chinese Martyrs. I didn’t really know much about them until I was asked to preach about them. But again, as I read their stories, I found myself overwhelmed. The loss was so great.

If you visit the Vatican website, there are details about the 120 people who are counted among those martyrs we remember. Most of them died in the 19th century, persecuted during the Boxer Rebellion. Reading about them, you’re struck by several things.

First, so many were children. Three of them were 4 years old. One was 10 months old. Some were teenagers, like 14-year-old Wang Anna. Moments before her death, she cried out: “The door of heaven is open to all,” then whispered, “Jesus, Jesus, Jesus.” Seconds later, she was beheaded.

So many were lay people. Mothers and fathers, even entire families. They were people like Zhuzi, who became a Catholic at age 17. He was captured and ordered to worship idols. When he refused, they cut off his right arm. He still refused, declaring: “Every piece of my flesh, every drop of my blood will tell you that I am Christian.” He died by mutilation.

While 87 of them were native Chinese—the first ever to be canonized—33 of them were missionaries from Europe, who went to China to proclaim the Kingdom of God. This is one reason Pope John Paul announced this memorial on October 1, 2000—the feast of St. Thérèse of Lisieux, the patroness of missionaries.

But every day we are reminded: The mission goes on. And so does the struggle. Chinese Catholics today are still being persecuted; authentic Catholicism is essentially an underground religion. And yet there is such great fervor, and devotion.

So we pray, in our church dedicated to the Queen of Martyrs, for all the martyrs of the world—and for those facing persecution on the other side of the world. We ask that the patroness of that great country, Our Lady of China, watch over them.

The Chinese Martyrs suffered greatly. But we carry in our hearts the beautiful words from the letter of St. John: “The victory that conquers the world is our faith,” he writes, “…and who indeed is the victor over the world but the one who believes that Jesus is the Son of God?” That belief transcends all fear, soothes all sorrow, and gives hope to despair.

At the Super Bowl, the song Bono performed was “Where the Streets Have No Name.” He has said that he wrote the song about growing up in Dublin, where everyone could tell who was rich, and who wasn’t, by the street they lived on. And the place he was singing about was a city where that wouldn’t matter anymore. It was his vision of heaven:

Our prayer is that we may one day know that place, and walk those streets, with the men, women and children we remember, the courageous Chinese Martyrs who gave their lives for the faith they love.

Their feast day is July 9.