Our Lady Queen of Martyrs holds an annual Novena to St. John Vianney starting July 27 and concluding on the saint’s official feast day.

This year, Reverend Monsignor Edward V. Wetterer, a Golden Jubilarian, will preside at the 11:30 a.m. Sunday Mass on July 27 and open the novena. Monsignor Wetterer is pastor emeritus of St. Michael’s in Flushing.

On Sunday, August 3, newly ordained Father Jason Espinal will celebrate the 11:30 a.m. Mass and lead us in the eighth day of the novena. He will be available after Mass to offer a First Blessing to those attending. The parish choir will be present to enhance this celebration with this new priest.

The novena will conclude Monday, August 4, with a sung, concelebrated Mass at 12:05 p.m.

The novena will be prayed following the 11:30 a.m. Masses on Sundays, and Monday through Saturday after the 12:05 p.m. daily Mass.

Please pray for the intercession of St. John Vianney to bless our diocese with good parish priests. We will have a sign-up sheet in the church and encourage everyone to select one of the seminarians from the Diocese class of 2014-15 and make him your prayer intention during this time. 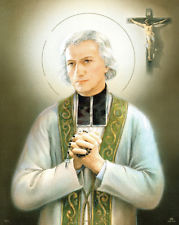 St. John Vianney — patron of priests worldwide, universally known as the “Curé [Priest] of Ars” —  was born on May 8, 1786 in the village of Dardilly, France. After serving a short time in the army during the Napoleonic period he entered a seminary to become a priest. He had a difficult time, particularly with Latin. Many, including his formation directors and instructors in the seminary, had  serious doubts that this man who did not have strong intellectual gifts, would be suitable for the priesthood. However, he persevered and was ordained in 1815 and served as a priest in the village of Ars in France. He was a man of great dedication to his call to be a priest and to serve his people. He preached in a very simple manner and had a great love of the Blessed Sacrament and the Blessed Mother and a special devotion to St. Philomena. Through his work as a confessor he brought about a spiritual renewal that touched not only the people of his parish, but all of France. He spent 14 to 18 hours a day in the confessional, surviving on only a few hours of sleep and a diet of boiled potatoes. As the word spread of his extraordinary abilities as a confessor, thousands made the journey to receive his spiritual counsel. He is an example of how God works wonderfully through those who dedicate their lives to him and who seek to do his will. John Vianney, a humble parish priest, is regarded by the Church as one of its great figures simply because he was faithful. John Vianney was canonized by Pope Pius XI in 1925.

He is the only diocesan priest ever to be canonized.
Source: Condensed biography from the St. John Vianney Catholic Church (www.sjvroundrock.org).