OLQM’s Main Altar Reredos—Part 2   We now bring you photos of each of the sixteen wood carvings, with a brief biography of each saint. We begin with the four saints clustered around the  painting of St. Dominic (upper left quadrant.)

Pope Gregory VII (c. 1015/1028 – 25 May 1085), born Hildebrand of Sovana (Italian: Ildebrando di Soana), was Pope from April 22, 1073 until his death. One of the great reforming popes, he is perhaps best known for the part he played in the Investiture Controversy, his dispute with Henry IV, Holy Roman Emperor, affirming the primacy of the papal authority and the new canon law governing the election of the pope by the college of cardinals. He was at the forefront of both evolutionary developments in the relationship between the Emperor and the papacy during the years before becoming pope. He was beatified by Gregory XIII in 1584, and canonized in 1728 by Benedict XIII as Pope St. Gregory VII. He twice excommunicated Henry IV, who in the end appointed the Antipope Clement III to oppose him in the political power struggles between Church and Empire. Gregory was hailed as one of the greatest of the Roman pontiffs after his reforms proved successful. As a youth he was sent to Rome to study. Among his masters were the erudite Lawrence, archbishop of Amalfi and the future Pope Gregory VI. Between 1058 and 1059, he was named archdeacon of the Roman Church, becoming the most important figure in the Papal administration. In his years as papal advisor, Hildebrand had an important role in the reconciliation with the Norman kingdom of southern Italy, in the anti-German alliance with the Pataria movement in northern Italy and, above all, in the introduction of a law which gave the Cardinals exclusive right on the Papal election. On the death of Alexander II, Hildebrand was conducted to the church of San Pietro in Vincoli, and there elected in legal form by the assembled cardinals, with the due consent of the Roman clergy and amid the repeated acclamations of the people. His first attempts in foreign policy were towards a reconciliation with the Normans. Gregory also summoned a council in the Lateran palace, which condemned simony and confirmed celibacy for the Church’s members. He  pronounced a sentence of excommunication against the German King Henry IV, divested him of his royal dignity and absolved his subjects from the oaths they had sworn to him. Gregory was the first pope to stand up to a king, and the first pope that excommunicated him. 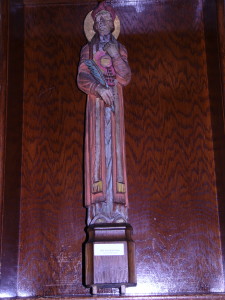 John Fisher (19 October 1469 – 22 June 1535) was an English Catholic bishop, cardinal and martyr. He shares his feast day with Saint Thomas More on 22 June in the Roman Catholic calendar of saints and 6 July on the Anglican calendar of saints. Fisher was executed by order of King Henry VIII during the English Reformation, for refusing to accept him as head of the Church of England. He is the only member of the College of Cardinals to have suffered martyrdom. John Fisher was born in Beverley, Yorkshire, England; he was one of four children. Fisher’s early education was probably received in the school attached to the collegiate church in his home town. At the end of July, 1516 he was at Cambridge for the opening of St John’s College and consecrated the chapel. Fisher attracted to Cambridge leading scholars from Europe, promoting the study not only of ancient gentile Latin and Greek authors, but of Hebrew. He was in his heart and soul a priest, and placed great weight upon pastoral commitment, above all popular preaching. He had a wide and deep vision to which he dedicated all his personal resources and energies. A scholar and a priest, harsh with himself, humble and conscientious, he managed despite occasional opposition to carry with him and administer a whole university. By Papal Bull dated 14 October 1504, John Fisher was appointed Bishop of Rochester at the personal insistence of Henry VII. Despite his fame and eloquence, it was not long before Fisher was in conflict with the new king, his former pupil, Henry VIII. When the question of Henry’s divorce from Queen Catherine of Aragon arose, Fisher became the Queen’s chief supporter and most trusted counselor.  In May 1532, Sir Thomas More resigned the chancellorship, and in June, Fisher preached publicly against the divorce. In January 1533, Henry secretly went through a form of marriage with Anne Boleyn. John Fisher was arraigned in Westminster Hall; the charge was treason, in that he denied that the king was the supreme head of the Church of England. He was executed on Tower Hill on 22 June 1535. He was later canonised on 19 May 1935 by Pope Pius XI along with Thomas More, after the presentation of a petition by English Catholics.

Thomas à Becket (1118 – 29 December 1170) was Archbishop of Canterbury from 1162 to his death. He is venerated as a saint and martyr by both the Roman Catholic Church and the Anglican Communion. He engaged in conflict with Henry II of England over the rights and privileges of the Church and was assassinated by followers of the king in Canterbury Cathedral. Thomas Becket was born in 1118 in Cheapside, London, and learned to ride a horse, hunt, behave like a gentleman, and engage in popular sports such as jousting. Beginning when he was ten, he received a brilliant education in civil and canon law at Merton Priory in England, and then overseas at Paris, Bologna, and Auxerre. Upon returning to England, he attracted the notice of Theobald, Archbishop of Canterbury, who entrusted him with several important missions to Rome and finally made him Archdeacon of Canterbury and Provost of Beverley. He so distinguished himself by his zeal and efficiency that Theobald recommended him to King Henry II when the important office of Lord Chancellor was vacant.  Henry desired to be absolute ruler of his dominions, both Church and State, and sought less clerical independence and a weaker connection with Rome. Thomas achieved his final position of power as the Archbishop of Canterbury in 1162, several months after the death of Theobald. Henry intended to further his influence by directing the actions of Thomas and diminish the independence and affluence of the Church in England. The famous transformation of Becket into an ascetic occurred at this time. A rift grew; Thomas was officially asked to sign off on the King’s rights or face political repercussions. Becket  refused to sign the documents and fled to the Continent, where Louis VII of France received him with respect and offered him protection. Henry, alarmed by the prospect of excommunication, allowed Thomas to return to England and resume his place. On 29 December 1170, however, knights arrived at Canterbury and assassinated Thomas in a side chapel of the cathedral. Soon after, the faithful throughout Europe began venerating Becket as a martyr, and in 1173—barely three years after his death—he was canonised by Pope Alexander III in St. Peter’s Church in Segni. 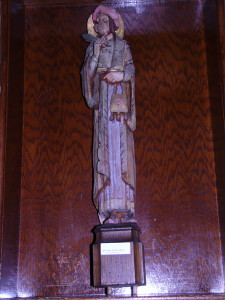 Thomas More (7 February 1478 – 6 July 1535) was an English lawyer, scholar, author, and statesman. During his life he gained a reputation as a leading Renaissance humanist, an opponent of the Reformation of Martin Luther, and a government official. For the last six years of his life he was Lord Chancellor. More coined the word “utopia”—a name he gave to the ideal, imaginary island nation whose political system he described in Utopia, published in 1516. An important counsellor to Henry VIII of England, he was imprisoned and executed by beheading in 1535 after he had fallen out of favor with the king over his refusal to sign the Act of Supremacy 1534, which declared the King the supreme head of the Church of England, effecting a final split with the Catholic Church in Rome. In 1935, four hundred years after More’s death, Pope Pius XI canonized him. More was declared patron saint of politicians and statesmen by Pope John Paul II in 2000. In 1969, More’s name was included in the General Roman Calendar, with a memorial in which he is venerated with John Fisher on 22 June, the day of the latter’s death. In 1980, More was added to the Church of England’s calendar of saints, again jointly with John Fisher, but on July 6, the day of More’s death. More greatly valued harmony and a strict hierarchy. The greatest danger to the health of the society as he saw it was the challenge that heretics posed to the established faith. For More, the unity of Christendom was not only the instrument for the eternal salvation of souls, but also the basis of a common understanding of human nature necessary for just law and earthly happiness. To his mind, the fragmentation and discord of the Lutheran Reformation were dreadful. In 1530 More refused to sign a letter by the leading English churchmen and aristocrats asking the Pope to annul Henry’s marriage to Catherine; he also quarrelled with Henry VIII over the heresy laws. The last straw for Henry came in 1533, when More refused to attend the coronation of Anne Boleyn as the Queen of England. Technically, this was not an act of treason as More had written to Henry acknowledging Anne’s queenship and expressing his desire for the king’s happiness and the new queen’s health. However, his refusal to attend was widely interpreted as a snub against Anne. He was beheaded on 6 July 1535.