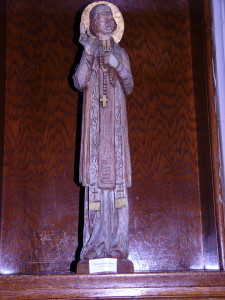 John Vianney (French: Jean-Baptiste-Marie Vianney;  8 May 1786 – 4 August 1859) was a French parish priest who is venerated as a saint and as the patron saint of all priests. He is often referred to as the “Curé d’Ars”. He became internationally notable for his priestly and pastoral work in his parish because of the radical spiritual transformation of the community and its surroundings,  attributed to his saintly life, mortification, and persevering ministry in the sacrament of confession. Vianney was born on 8 May 1786, in the French town of Dardilly and was baptized the same day. The Vianneys were traditional Catholics who helped the poor and gave hospitality to Saint Benedict Joseph Labré,  who passed through Dardilly on his pilgrimage to Rome. By 1790, the French Revolution forced many loyal priests to hide from the government in order to carry out the sacraments in their parish. Vianney’s  first communion lessons were secretly carried out in a private home by two nuns. He made his first communion at the age of 13. In 1802, the Catholic Church was re-established in France. He received minor orders and the subdiaconate on 2 July 1814, was ordained deacon in June 1815, and was ordained priest on 12 August 1815. He said his first Mass the next day. He was appointed pastor of the parish of Ars, a town of 230, and realized that the Revolution’s aftermath resulted in religious ignorance, due to many years of the destruction of the Catholic Church in France. (At the time, Sundays in rural areas were spent in the fields working, or spent dancing and drinking in taverns.) He  came to be known internationally, and people from distant places began traveling to consult him as early as 1827. By 1855, the number of pilgrims had reached twenty thousand a year. During the last ten years of his life, he spent sixteen to eighteen hours a day in the confessional. On 4 August 1859, Vianney died at age 73. Biographers recorded miracles performed throughout his life, obtaining money for his charities and food for his orphans; he also had supernatural knowledge of the past and future, and could heal the sick, especially children.  On 8 January 1905, Pope Pius X declared him Blessed and proposed him as a model to the parochial clergy; in 1925 Pope Pius XI canonized him. In 1959, Pope John XXIII issued Sacerdotii Nostri Primordia, an encyclical on Vianney. In honor of the 150th anniversary of Vianney’s death, Pope Benedict XVI declared a year for priests (2009-2010.) 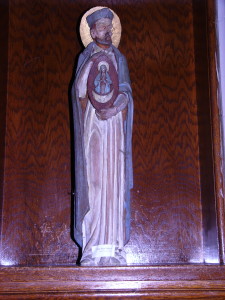 Philip Romolo Neri (Italian: Filippo de Neri; also known as Apostle of Rome; July 22, 1515 – May 25, 1595), was an Italian priest, noted for founding a society of secular priests called the “Congregation of the Oratory”. He was born in Florence, and carefully brought up, receiving his early teaching from the friars at San Marco, the famous Dominican monastery in Florence. At the age of 18, Philip was sent to his father’s childless brother, Romolo, a wealthy merchant  at San Germano, a Neapolitan town to assist him in his business. He gained Romolo’s confidence and affection, but soon after coming to San Germano Philip had a conversion. He no longer cared for things of the world, and chose to relocate to Rome in 1523. There, he began to pursue his own studies  under the guidance of the Augustinians.[Following this, he began those labours amongst the sick and poor which gained him in later life the title of “Apostle of Rome”, and also ministering to the prostitutes of the city. In 1538 he entered on the home mission work for which he became famous; he travelled throughout the city, seeking opportunities of entering into conversation with people, and of leading them on to consider the topics he desired to set before them. In 1548 he founded the confraternity of the Santissima Trinita de’ Pellegrini e de’ Convalescenti, whose primary object was to minister to the needs of the thousands of poor pilgrims who flock to Rome, and also to relieve the patients discharged from hospitals but who were still very weak. In 1551 he passed through all the minor orders, and was ordained deacon, and finally priest (on 23 May). In 1556 he tentatively began the institute with which his name is more especially connected, that of the Oratory. (The musical selections were called oratorios.) Neri formally organized, under permission of a papal bull dated July 15, 1575, a community of secular priests, called the Congregation of the Oratory. Philip died around the end of the day on 25 May 1595, Corpus Christi that year, after having spent the day hearing confessions and receiving visitors. He was beatified by Paul V in 1615, and canonized by Gregory XV in 1622. His memorial is celebrated 26 May, and his body is in the Chiesa Nuova. 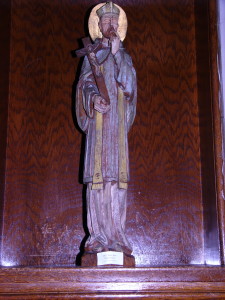 John Nepomucene or John of Nepomuk (Czech: Jan Nepomucký) (c.1345 – March 20, 1393) is a national saint of the Czech Republic, who was drowned in the Vltava river at the behest of Wenceslaus, King of Bohemia. Later accounts state that he was the confessor of the queen of Bohemia and refused to divulge the secrets of the confessional. On the basis of this account, John of Nepomuk is considered the first martyr of the Seal of the Confessional, a patron against calumnies and, because of the manner of his death, a protector from floods. He first studied at the University of Prague, then furthered his studies in canon law at the University of Padua from 1383 to 1387. In 1393 he was made the vicar-general of Jan of Jenštejn, who was the Archbishop of Prague from 1378 to 1396. In the same year, on March 20, he was tortured and thrown into the river Vltava from Charles Bridge in Prague at the behest of Wenceslaus IV, King of Bohemia. He was  put to death for defending the laws and the autonomy of the Catholic Church, and was revered as a saint right after his death. John of Nepomuk is seen as a martyr to the cause of defending the Seal of the Confessional, by nationalists as a Czech martyr to imperial interference, and by most historians as a victim of a late version of the inveterate investiture controversy between secular rulers and the Catholic hierarchy. In 1683 the Charles Bridge was adorned with a statue of the saint; in 1708 the first church was dedicated to him at Hradec Králové; a more famous Pilgrimage Church of Saint John of Nepomuk was founded in 1719. Meanwhile, the process was inaugurated which ended with his canonization. On May 31, 1721, he was beatified, and on March 19, 1729, he was canonized under Pope Benedict XIII. The figure of Saint John of Nepomuk is often encountered in Central and Eastern Europe, including the Czech Republic, Italy, Germany, Poland and Lithuania. He is usually portrayed with a halo of five stars, commemorating the stars that hovered over the Vltava River on the night of his murder. Other attributes are: a priestly dress, the palm of martyrs, carrying a cross, an angel indicating silence by a finger over the lips. His tomb, a Baroque monument cast in silver and silver-gilt, stands in St Vitus Cathedral, Prague. A statue of Saint John of Nepomuk has often been erected on bridges in many countries, such as on the Ponte Milvio in Rome. 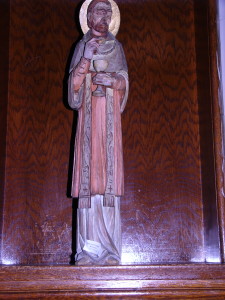 Charles Borromeo (Italian: Carlo Borromeo; latinized as Carolus Borromeus) (October 2, 1538 – November 3, 1584) is an Italian saint and was a cardinal of the Roman Catholic Church. He worked during the period of the Counter-Reformation and was responsible for significant reforms in the Catholic Church, including the founding of seminaries for the education of priests. Pius IV named Borromeo as protonotary apostolic (secretary of state), entrusted with both the public and the privy seal of the ecclesiastical state. He then named Borromeo to the post of Cardinal of Romagna and the March of Ancona, and supervisor of the Franciscans, Carmelites and Knights of Malta. At age twenty-two, Borromeo was highly trusted at the papal court. Soon afterwards the Pius IV raised him to the archbishopric of Milan.  He established an academy of learned persons, the Academy of the Vatican Nights, and published their memoirs as the Noctes Vaticanæ.About the same time, Borromeo founded and endowed a college at Padua, today known as Almo Collegio Borromeo, which he dedicated to Saint Justina. Owing to his influence over Pius IV, he facilitated the final deliberations of the Council of Trent. He took a large share in the creation of the Tridentine Catechism (Catechismus Romanus). Subsequently he devoted himself wholly to the reformation of his diocese. He made numerous pastoral visits, and restored dignity to divine service. In conformity with the decrees of the Council of Trent, which suggested simplifying church interiors, Borromeo cleared the cathedral of ornate tombs, rich ornaments, banners, and arms. He extended his reforms to the collegiate churches, monasteries and even to the Confraternities of Penitents. He believed that abuses in the church arose from clergy ignorance. Among his most important actions, he established seminaries, colleges and communities for the education of candidates for holy orders. His emphasis on Catholic learning greatly increased the preparation of men for priesthood and benefited their congregations. Borromeo’s manifold labors and austerities appear to have shortened his life. He was seized with an intermittent fever, and died at Milan on 3 November 1584. He was canonized in 1610, and his feast is celebrated on 4 November.