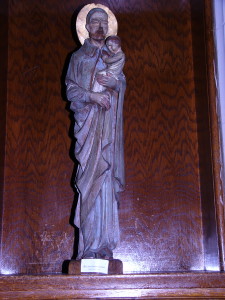 Vincent de Paul (24 April 1581 – 27 September 1660) was a Catholic priest dedicated to serving the poor, who is venerated as a saint. He was born in Landes, Gascony, France, to a peasant family, and graduated in theology at Toulouse. He was ordained in 1600, remaining in Toulouse until he went to Marseille. In 1605, on his way by sea back from Marseille, he was taken captive by Turkish pirates, who brought him to Tunis and sold him into slavery. After converting his owner to Christianity, Vincent de Paul was freed in 1607. After returning to France, he went to Rome to continue studying until 1609, when he was sent back to France on a mission to Henry IV of France; he served as chaplain to Marguerite de Valois. He began to give himself almost completely to charitable works. For a while he was parish priest at Clichy, but in 1612 he began to serve the Gondi family. He began giving peasant missions on the estate. In 1622 he was appointed chaplain to the galleys, and in this capacity gave missions for the galley-slaves. He founded the Congregation of the Mission, and with Louise de Marillac he also founded the Sisters of Charity, the first congregation of women caring for the sick and poor outside of the convent. During his lifetime, the Lazarists or Vincentians increased in numbers and spread across the world. Throughout his long years of service to the poor, Vincent stood as the conscience of the kingdom, in spite of the opposition from the wealthy at that time and often also from the poor, who lacked appreciation.  In 1705, the Superior-General of the Lazarists requested that the process of his canonization might be instituted. On 13 August 1729, Vincent was declared Blessed by Pope Benedict XIII. He was canonized nearly eight years later by Pope Clement XII on 16 June 1737. In 1885, Pope Leo XIII gave him as patron to the Sisters of Charity. He is also patron to the Brothers of Charity. His heart is still incorrupt, and is displayed in a reliquary in the chapel of the motherhouse of the Sisters of Charity in Paris. In 1737, his feast day was included in the Roman Calendar on 19 July, because his day of death was already used for the feast of Saints Cosmas and Damian. 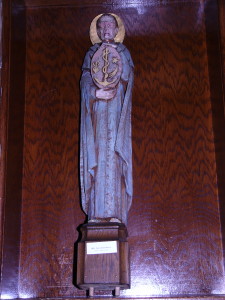 John Bosco (Saint John Bosco (16 August 1815 – 31 January 1888), born Giovanni Melchiorre Bosco, also called Don Bosco, was an Italian Catholic priest and educator, who put into practice the dogma of his religion, employing teaching methods based on love rather than punishment. He placed himself under the protection of Francis de Sales (thus his followers styled themselves the Salesian Society) and succeeded in establishing a network of centers to carry on his ministry. In recognition of his work with disadvantaged youth, he was canonized by Pope Pius XI in 1934.  John Bosco was born in Becchi, Piedmont. Early in his childhood he had a vision or dream in which he learned what his life would be dedicated to and in the dream he heard a voice which said, “Not with blows, but with charity and gentleness must you draw these friends to the path of virtue.” Don Bosco began as the chaplain of the Rifugio (“Refuge”), a girls’ boarding school in Turin, but he had many ministries on the side such as visiting prisoners, teaching catechism and helping out at country parishes. He slowly organized his helpers into a loose “Congregation of St. Francis de Sales,” while also training select older boys for the priesthood. In 1859, Bosco selected an experienced priest, fifteen seminarians and one high school boy and formed them into the “Society of St. Francis de Sales.” This was the nucleus of the Salesians, the religious order that would carry on his work. Don Bosco died on January 31, 1888. His funeral was attended by thousands and very soon after there were popular demands to have him canonized. Bosco was declared Blessed in 1929 and canonized on Easter Sunday of 1934, when he was given the title of “Father and Teacher of Youth.” While Bosco had been popularly known as the patron saint of illusionists, on January 30, 2002, Fr. Silvio Mantelli, SDB, petitioned Pope John Paul II to formally acclaim St John Bosco the Patron of Stage Magicians. Catholic stage magicians venerate Don Bosco by offering free magic shows to underprivileged children on his feast day, January 31. 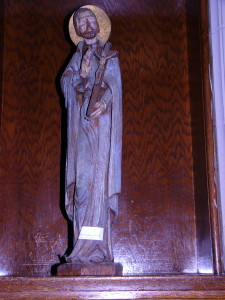 Camillus of Lellis (25 May 1550 – 14 July 1614) was an Italian monk.. He was born at Bucchianico (now in Abruzzo, then part of the Kingdom of Naples). Camillus joined the Venetian army while still only a youth. After his regiment was disbanded in 1574 Camillus worked in a hospital, and later rejoined the Venetian army and fought in a war against the Turks. After the war he later returned to the hospital in Rome, became a nurse and later director of the hospital. Camillus established the Order of Clerks Regular Ministers to the Sick, better known as Camillians. His experience in wars led him to establish a group of health care workers who would assist soldiers on the battlefield. The red cross on their cassock remains a symbol of the order today. Members also devoted themselves to the plague-stricken. Camillus was so distressed at how hopeless plague cases were treated during his time, that he formed the “Brothers of the Happy Death,” for plague victims. It was for the efforts of the Brothers and his healings that the people of Rome credited Camillus with ridding the city of plague and, for a time, Camillus became known as the “Patron Saint of Rome”. Throughout his life Camillus’ ailments caused him suffering, but he allowed no one to wait on him and would crawl to visit the sick when unable to stand and walk. It is said that Camillus possessed the gifts of healing and prophecy. He died in Rome in 1614. Camillus was beatified by Pope Benedict XIV in the year 1742, and later canonized by him four years later in 1746. Popularly, Camillus is the patron saint of nurses, and against gambling. His mortal remains are located in the altar in the Church of Mary Magdalene, Rome, Italy, along with several of his relics. Also on display is the cross which allegedly spoke to Camillus, and asked him, “Why are you afraid? Do you not realise that this is not your work but mine?” which has become the motto associated with St. Camillus, as well as healthcare workers who were inspired by him. The Congregation of the Servants of the Sick of St Camillus, the Daughters of St Camillus, the Secular Institutes of Missionaries of the Sick Christ Our Hope, of the Kamillianische Schwestern and of the Lay Camillian Family, were born later of the charism and spirituality of St. Camillus. In the US, his feast day is currently an optional “Memorial” celebrated on July 18.

Benedict Joseph Labré (French: Benoît Joseph Labré) (March 25, 1748–April 17, 1783) was a French mendicant born in Amettes, near Arras in the north of France, the eldest of fifteen children of a prosperous shopkeeper. He was religious from a very early age,and was noted for performing public acts of penance for his sins. He was inspired by the example of Alexius of Rome to “abandon his country, his parents, and whatever is flattering in the world to lead a new sort of life, a life most painful, most penitential, not in a wilderness nor in a cloister, but in the midst of the world, devoutly visiting as a pilgrim the famous places of Christian devotion”. He therefore settled on a life of poverty and pilgrimage. He first travelled to Rome on foot, subsisting on what he could get by begging. He then travelled to most of the major shrines of Europe, often several times each. He visited Loreto, Assisi, Naples, and Bari in Italy, Einsiedeln in Switzerland, Paray-le-Monial in France, and Compostela in Spain. During these trips he would always travel on foot, sleeping in the open or in a corner of a room, with his clothes muddy and ragged. He lived on what little he was given, and often shared the little he did receive with others. He is reported to have talked rarely, prayed often, and accepted quietly the abuse he received. He was said to have cured some of the other homeless he met and to have multiplied bread for them. In the last years of his life (his thirties), he lived in Rome, for a time living in the ruins of the Colosseum and made only a yearly pilgrimage to Loreto. He was a familiar figure in the city and known as the “saint of the Forty Hours” for his dedication to Eucharistic adoration in the Quarant’Ore. The day before he died, he collapsed in the church of Santa Maria ai Monti, blocks from the Colosseum, and despite his protestations was charitably taken to a house behind the church. He died there of his malnutrition on April 17, during Holy Week in 1783 and was buried in Santa Maria ai Monti. He was attributed 136 separate cures to his intercession within three months of his death.  A cult grew up around him very soon after his death, and he was declared Blessed by Blessed Pius IX in 1860, and later canonized by Pope Leo XIII in 1881. His feast day  is April 16.